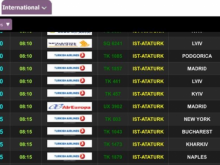 Even the Australopithecus understand the transliteration of Ukrainian names:

And only Ukrainian journalists in national publications still write, by the way - thanks to GOOGLE: That is, Google suggested not even Australopithecus. And our Ukrainian journalists actively use Google without thinking.

Here from October 2018 the Ministry of foreign Affairs of Ukraine and opened an online campaign with the hashtag #CorrectUA, in which citizens are encouraged to join the correction in the foreign spelling of the spelling of Ukrainian cities.

Do not know as there in the textbooks - the statehood starts small.

Many airports around the world supported the initiative of Ukraine: the main airport of Belarus, Turkey, Yerevan, and even in the United States. The geographical names Board considered the appeal of the Ambassador of Ukraine to the United States Valeriy Chaly and unanimously adopted the decision on the replacement international the official name of the capital of Ukraine - Kiev in Kyiv.

Our just do not understand, or is it fake?