Chornobaivka is waiting for Russian "tourists": what impresses the legendary village-meme 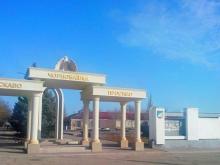 Chornobaivka is waiting for Russian "tourists": what impresses the legendary village-meme
In just a couple of weeks of the war, the small village of Chornobaivka in the Kherson region became famous throughout Ukraine and far beyond. And all thanks to the Russian "tourists", who, probably, in the conditions of severe sanctions have not so many opportunities for travel. The zeal of the Russians with whom they go to Chornobayivka can only be envied. Here is UNIAN. Tourism has decided to find out what this village, which has long since become a meme, is so attractive to "guests".

The legend of the village-meme Chornobaivka
What is Chornobaivka
The legend of the village-meme Chornobaivka
For the first time, Chornobayivka, which most Ukrainians have hardly heard of before, invaded the Internet on February 27, 2022, when the Ukrainian military defeated helicopters and a landing party of occupiers trying to land at a local airport. Then the Ukrainians were just happy with the achievements of our defenders in the next direction. However, in eight days the story repeated itself - on March 7, the Armed Forces destroyed about 30 helicopters of the occupier, and later defeated the equipment for the third time. At that time, society was already beginning to notice a "strange trend."

On March 16, it became known about the fourth case of destruction of the occupier's combat helicopters in Chornobayivka, and then the Ukrainian Internet space could not restrain itself further - the network exploded with memes. The treasure trove of jokes is still being replenished - below we offer you to view a whole selection of the best!

Then there were the fifth, sixth and seventh cases when the Ukrainian military, with all the hospitality of our people, hosted the "hottest" reception for guests from Russia, especially conveniently located Russian Commander of the 8th Army - Lieutenant General Andrei Mordvich. And you will not believe, but on March 22 the eighth party of "Russian tourists" finished the trip in Chornobayevka! We are almost certain that there will be others, and our military will certainly welcome them there.

Of course, sooner or later the leadership of Ukraine had to shed light on the phenomenon of Chornobaivka, where the Russians are smeared like honey.

"Ukrainian Chornobayivka will go down in the history of wars. This is a place where the Russian military and their commanders have shown themselves completely ... as they are - incompetent, able to simply drive their people to slaughter," Ukrainian President Volodymyr Zelensky said on March 20.

On March 22, Oleksiy Arestovych, an adviser to the head of the President's Office, also decided to explain what was happening in Chornobayivka. And here's what - from the very beginning, the Russians rushed to accumulate a huge group from the Crimea in southern Ukraine to move further to Kherson, Mykolaiv and Odessa. But they did not take into account that there are very narrow passages, so the occupiers can move only "by capillary". At the same time, they are trying to accumulate a helicopter group at the same airfield in Chornobayivka.

And a helicopter can only land where you want, fly where you want. Helicopter topography and airfield support are needed, so they have to choose an airfield. They play "Fridays" they may not use it. There is such a node, and they are coming to this node and will continue to arrive, "he explained.

What is Chornobaivka
In the meantime, we decided to find out what the village of Chornobaivka might be of interest to tourists. Thus, Chornobaivka is a small village with a population of 9,275 people, 10 kilometers from Kherson.

Chornobayivka was founded in the late 17th century, and the history of its origin is associated with the Zaporozhian Sich Cossack Peter Chornobay, who received these lands as a gift from Russian Tsarina Catherine (ahem, maybe - the Russians just nostalgic tourism?).

In general, Chornobaivka is a classic post-Soviet village with a characteristic collective farm architecture and a standard set of monuments, where tourists have nothing to see. However, according to Google, before the war there were even a couple of hotels and several other catering establishments in the village!

However, there are some interesting tourist attractions around Chornobayivka. First, near the village there are mounds of III millennium BC. BC - II millennium BC In general, there are many Scythian mounds in the Kherson region. At least, lovers of archeology and history will definitely be interested.

But, as we wrote above - the regional center of Kherson is located only 10 kilometers from Chornobaivka, so you can combine these two tourist destinations. The Russian occupiers are also trying to do this, but the people of Kherson have already shown that they are not happy to see them there.

If you go a little further from Chornobaivka, you can get to several unique natural monuments of Kherson region. However, "Russian tourists" are also there now, and they behave like real cattle - littering, burning everything around and in general

do not protect nature. The only hope is that they will compensate for the damage with quality fertilizers.

For example, only 45 kilometers from Chornobaivka is the Black Sea Biosphere Reserve - on the seashore, where among the unique nature you can see dolphins and rare birds, including pelicans and cormorants. 50 kilometers from Chornobayivka are the famous Oleshkiv Sands - the largest desert in Europe, and 145 kilometers - the unique biosphere reserve "Askania-Nova", where you can see in the wild zebras, Przewalski's horses, antelopes, bison, various birds - a total of almost 900 species of fauna. We want to hope that after the "Russian tourists" we will still be able to see all this beauty with our own eyes.

And we should not forget that from Chornobaivka to the sea is not so far - a little more than 100 kilometers to the Iron Port, Lazurny and Skadovsk. But there is also no one waiting for "Russian tourists" - they can only go to the bottom of the Black Sea, feed the fish.

When Ukraine finally wins the war and expels the Russian occupiers from its land, many noteworthy locations will appear on the Ukrainian tourist map. Ukrainians and foreigners will come there to honor the heroes and victims of the war and at the same time give them a new, better life. Who knows - maybe Chornobaivka will become a powerful "place of power" on the map of Ukraine!

And now - about propaganda, as it is done:

"who received these lands as a gift from the Russian Tsarina Catherine" - here are the elements of propaganda. And my grandfather said that my great-great-grandparents came and founded a hamlet in the steppe in the winter of Ingul Palanka, when Queen Catherine II began persecuting the Zaporozhian Cossacks on the basis of agreement: - "" of our throne and thought of course to make themselves, in the middle of the fatherland, an area completely independent, under its own frantic rule, in the hope that the propensity for debauchery and robbery will be in abundance, constantly renewing and multiplying their number.
Question: Have you terminated the basis of dependence? So farming or debauchery? And the fatherland - Ingul Palanka or Moksha swamps? ... and multiply their number ??? Like wealthy peasants in their thirties ... As now ... "They have a toilet in every house !!!"

Nothing has changed in the rhetoric of kings!

And this bodjaga has been going on since 1240 - everything written in Wikipedia and historical books about Kievan Rus, Ukraine, the Moscow Empire and the Horde - everything must be rewritten and look at these historical events through the prism of Moksha propaganda.
Am I wrong? By the way - some articles in the Wiki are already being corrected!

- "Ukrainian Chornobaivka will go down in the history of wars" - UNIAN

- Also the capital of Kievan Rus - the city of Kyiv, in Kiev, to Kiev, near Kiev, in the Kiev region. And then they write KIEVA - but there is no such city in modern Ukraine and in Kievan Rus, too, was not!

And why are we in Kievan Rus and Ukraine? I am for Kievan Rus! Within its limits ... And today - so it is necessary 52 STATES ... We jumped!