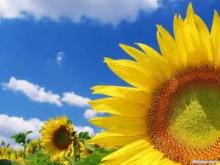 Ukraine is a young, independent state which was formed in 1990 after the collapse of the socialist state called the Union of Soviet Socialist Republics (the USSR). The country is located in the center of Europe. Precisely, the geographical centre of Europe is situated in Ukraine: in the village of Dilovoe, Rakhiv district, Zakarpatskaya (Transcarpathian) region, not far from the Ukrainian-Romanian border.

The Dnieper River is the third largest river in Europe after the Volga and the Danube. The Dnieper divides the Ukraine into Left-bank Ukraine and Right-bank Ukraine. The Carpathian Mountains are in the west of Ukraine, the Crimean Mountains are on the Crimea peninsula. The south of Ukraine is washed by the Azov Sea and the Black Sea. The country borders on the Russian Federation in the north and in the east. The Crimean Mountains, the Carpathians and the northern regions of Ukraine are largely forested. The coastal territories, the southern areas, and most of the peninsula of Crimea are solid steppe territories with very dry summers, and windy, frosty winters. In ancient times these territories were considered to be really unsuitable for settlement and were called "Wild Field".

The history of the state of Ukraine begins with the origination of Kievan Rus in Eastern Europe in the 9th century. It proved to be monarchic state which stretched from the Baltic Sea to the Black Sea and had its capital in the city of Kiev. After the invasion of the Mongol-Tatars in 1240, the monarchy gradually split into separate kingdoms which joined Lithuania, Poland, Moldova, Hungary.

Zaporozhye Cossacks activity and the rebellion led by Hetman Bohdan Khmelnytsky against the domination of foreigners and for the transition of areas controlled by Zaporozhye Cossacks under protection of Russia in 1654 played a great role in the development of Ukraine as an independent state. Since then most of the territories of modern Ukraine became a part of the Russian Empire (Little Russia), then became a part of the Soviet Union as the Ukrainian Soviet Socialist Republic, and finally they have been within the independent state of Ukraine since 1990. This complex history of the formation of the state, numerous wars on the territory of the country, and population of different religious believes gave rise to old relics and monuments, museums, and places of interest in terms of the educational tourism development, and ethnic tourism growth in the Crimea and the Carpathians.

The herds of wild horses and buffalos had been wandering on the lands of Ukraine before 1850, bears could be found in the flooded areas of the Dnieper River (while nowadays they live only in the Carpathians), and you still will not find farmed fish such as the well-known crucian carp, flat head carp in the rivers, only European carp, bream, zander, pike, asp and other species of wild fish.

In addition to thousands of state-protected natural areas in Ukraine one can easily find solitary places which are interesting not only to researchers, extreme sport fans but also to common travellers and tourists. Due to excessive colonization of our planet, visiting and staying at relatively natural areas becomes the priority of environmental tourism, rural tourism, green tourism and extreme tourism in Ukraine.

Credit should be given to the Soviet power for building in Ukraine hundreds of thousands of preventive clinics, health resorts, and recreation centres for helping to maintain and build up working population health. Furthermore the natural resources were used, among them are mineral waters of Mirgorod, Truskavets, Khmelnytskyi, Berezivsk, coasts of the Black Sea and the ​​Azov Sea, the Crimean Mountains and the Carpathians. Almost every industrial enterprise had its departmental recreation centre on the river bank or shore of the Azov Sea and/or the Black Sea but always in relatively intact places.

Today, most of these resorts are saved and renovated for a modern, high quality demanding domestic and foreign health tourism. Many new private facilities for tourism and recreation have already been built and more are under construction. The quality of services provided is growing rapidly. We believe the site RESTPLACE.COM.UA - created by our team of professionals - will contribute to the development of tourism in Ukraine and every visitor of this site will find a wonderful place to spend a vacation.