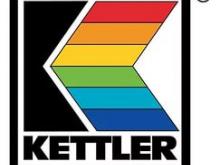 Who are the fans of cycling does not dream of cycling brand Kettler - representing impeccable German quality based not only on the world of innovative technologies, but also on its patented multiple ideas and inventions aimed at satisfying the most sophisticated needs of European consumers spoiled. The world's first bike with a welded aluminum frame (1977), the first all-weather aluminum table tennis table and an exercise bike the Golf, performing the revolution in home fitness, the first elliptical trainer with located behind the flywheel - and other innovations that are included in the story and presented in museums - is an incomplete list of achievements of the brand Kettler.

Beginning in 1949 with the production of garden furniture, Kettler company has grown into a giant global industry for the production of fitness equipment and sports clothing, shoes, baby products and children's sports leisure. Prices for the company's products can not be called "democratic", but not so exorbitant, focused on the consumer appreciates the ratio of price - quality. Compare the price dynamics can be an example orbitrek supermarket goods ranging from 4tys.do 600tys. UAH. in 2015, the prices, while on the cardio kettler cross m price is significantly below the average range. Unseparated leg movement, sparing the knee joint; built-in computer with the functions of fixing the workout time, calories burned, distance traveled, speed, fat burning rate and heart rate, fitness - fitness and test - assessment of pulse recovery - such professional orbitreki quality of Kettler included in the line brands.

The main production company located in Germany, and despite the partial displacement in "high places" - the brand Kettler left the exclusive German quality and the GS logo - compliance with European safety standards. This is in no small measure contributes to the cooperation with a group of scientists of the Technical University of Dortmund and the specific tasks received from leading medical centers in Germany for the development of simulators that allow to restore the mobility of the joints, spinal curvature and slim figure. Machine-building standards, quality control and a rolling motto voiced by company founder Heinz Kettler (1926 - 2004): - "" I have always said that we - the German company and do good things. It is clear without words, and everything else does not matter, "Since 2005, the company is headed by the founder's daughter, leaving as a priority in the first place:.. Comfort and convenience, reliability and safety, style and prestige.
Company products for people Heinz-Kettler GmbH & Co. KG is represented in the prestigious German catalog "Brands of the Century" (the first aluminum bike), in 2009 -2010g. received the title of "Most Innovative Brand" at the Plus X Awards - the biggest competition in Europe in the field of technology, sport and lifestyle, and a lot of positive consumer tests the German Institute for consumer information (Stiftung Warentest) once again highlight the quality of the brand Kettler products.
Today the company occupies a leading position in Europe in terms of sales of goods for home use, and the US is the largest consumer, along with Australia, Japan, Korea, and others. In the world of sports of Ukraine line Kettler brand of household goods, Sports and Tourism has deserved priority.