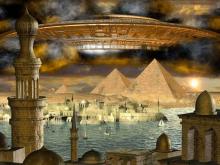 What do we know about UFOs? According to Wikipedia - is: "the observed object resembling an aircraft whose affiliation is not recognized by an observer on earth." The rest of what we know comes down to information received from the media, shall communicate to our consciousness is not always the facts, but there is always something that we should hear and see on whose - that commandment.
Since the first publications in the 60s of the last century of UFO sightings all the information about unidentified moving objects in the air is not aimed at the explanation of the phenomenon as such, not in search of scientific evidence - almost always an unidentified flying object is assigned to an extraterrestrial origin. And in most cases unidentified objects represented or very huge, or are comparable to known terrestrial aircraft. Statistics show that up to 90% of all the evidence of unidentified flying analyzing processes is explained by Earth natural phenomena - the rest of the percentage is inexplicable.

Besides the version of the visits to Earth extraterrestrial civilizations among ufologists have a version of the appearance of unidentified flying objects as a result of the activities of Earth, unknown to modern science of civilizations, it is possible from the parallel worlds or from another time. In light of recent research using hadron kollayzena latest reality emerges.

Whatever it was - it was at this time, only the vision of an event did not happen immediately. The whole reason was to photograph unusual noises made while traveling in with. Raygorod Cherkasy region.
It was the month of January, the snow lay decently - 30 cm, the sun shines brightly, the frost was over 10gr.S. We walked together on the midday train Znamenka - flowering plants. The road from the village to stop the train at the railway runs through the open field, marching slightly uphill, to go too far - almost 2 km. The aim was to check the photo - if we can capture the license plates oncoming car at a distance of ~ 100m. Looking at the photo drew attention to interference, it was thought that this interference. But once there is a question:
- Why not through the whole picture, as it were, from the surface of the Earth, but not yet with the surface, and in the "movement";
Why among the hundreds of pictures on the camera of the smartphone Nokia 2700 classic such interference was not;
Why in the upper part of the image is clearly observed object.
The assumption noise disappeared for several reasons: a hindrance must go through the entire screen and does not have the upper body chasi explicit photos, probably the low noise through the noise to the area was illuminated - it turns out that the interference was fast, faster than the camera shutter operates. If this is unknown insect - why not strictly linear motion? In this area it is also possible interference from radioactive substances - but also isotopes are moving chaotically.
The next day we arrived at Raygorod of bold and again walking along the same road. We stopped and studied the photo place, figured distances and estimated speed of movement of the subject in the photo. It turned out the following:
Approximate height recorded movement UFO - 8 -12m, pretty rough, but it's true. Assuming that the time the shutter is released the camera in this snow, dazzling sunshine 1/500 - 1 / 1000sek have a simple proportion and speed of the UFO movement. Attention!
at 1/500: 4000m / -6000m SEC / SEC or 1/1000: 8000m / 10000m-SEC / SEC
Now let's see what is the escape velocity:

Any questions? We - the No. 1 Unidentified flying object, embedded camera phone Nokia 2700 moving at a speed comparable with the first cosmic velocity needed for separation from the Earth and out into space. All this is very roughly - but in fact - a fact!
Photo fix on a moving object relates to the "solid" rod-shaped UFO which, according to the classification of ufologists, there are length from a few centimeters to a few meters - which is also in line with our image. Finally - itself photo: